A Song for Charity: Merynda Adams ’84

Merynda Adams ’84, a professional harpist, has been using her gifts and a spirit of compassion to help those in need.

In 2015, Adams was inspired to begin creating what would become the Chamber Music for Charity Concert series, which she established under the non-profit Stardust Music Society of New Jersey.

The series has since begun its third season, raising more than $5,000 for local charities including America’s Grow-A-Row, HomeSharing and Family Promise.

Adams said the series represents the culmination of Oak Knoll’s influence both on Adams’ musical talent and desire to serve.

“At Oak Knoll, there was always a sense of giving back,” she said. “We had so many opportunities to pursue our interests and intellectual pursuits on our way to becoming ‘women of promise.’”

It was in the Lower School where Adams was also introduced to the harp when renowned harpist Kathleen Bride came to campus.

“I fell in love with the sound of the instrument and I began studies with her,” said Adams, who studied with Bride at the Manhattan School of Music, where Adams earned a bachelor’s degree in harp performance.

Adams’ love of music was realized in different ways at Oak Knoll, singing in the choir and playing recorder, piano and violin under the tutelage of teachers Marie Finkel and Linda Mirabella.

“It was wonderful to have such a supportive music department in both the Upper and Lower Schools,” she said. “The musical interests that were begun and fostered at Oak Knoll have made all the difference in making my life complete, and I am sincerely grateful.”

The series wasn’t Adams’ first foray into using her musical talents to help others. In 2009, she organized a concert to benefit the Community Food Bank of New Jersey, which, appropriately enough was founded by Kathleen DiChiara, mother of Adams’ classmate Erin DiChiara ’84.

In addition to the series, Adams has released a Christmas harp album, with the proceeds – more than $2,000 – benefitting a mission in Haiti.

Adams is a 1994 winner of the Artists International Competition and the Goldblatt Award. In addition to her bachelor’s degree, she has studied at the Hilversums Conservatorium in the Netherlands.

A professional harpist who earned a bachelor’s degree in harp performance from the Manhattan School of Music. She is a 1994 winner of the Artists International Competition and the Goldblatt Award.

Oak Knoll School of the Holy Child is a Catholic independent school coeducational from pre-K to grade 6 and all girls in grades 7 to 12. Oak Knoll was founded in 1924 and is one of 10 schools in the Holy Child Network of Schools that provides independent Catholic education across the United States. 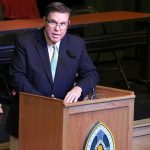 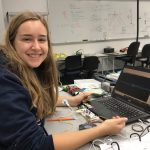