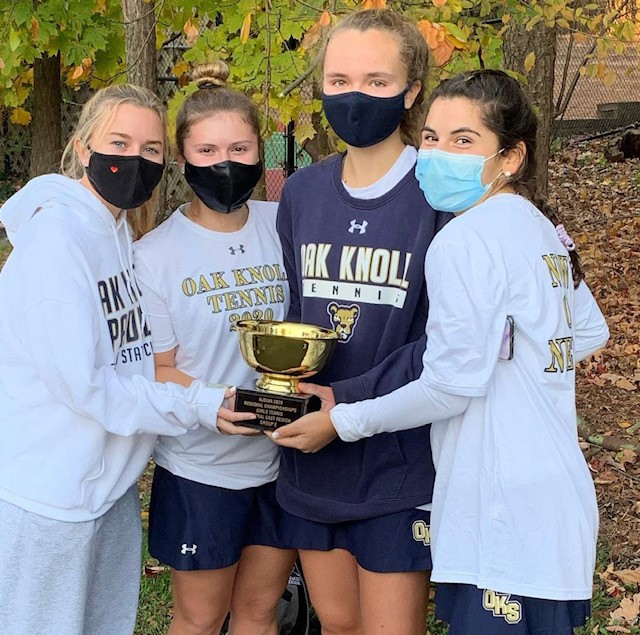 The Royals claimed the Regionals only three other times in the school’s history – in 1987, ‘88 and ’89 when now-OKS Head Tennis Coach Doryan Amato ‘89 was a player.

“Kent Place is the gold standard for high school tennis and one of the dominant teams in our area,” said co-captain Maeve Olson, ’21.

The Royals said playing ace Kent Place multiple times this season contributed to their win. Kent Place has scooped up the tennis county title for the past five years, while making deep runs each year in the state tournaments.

“We knew this was going to be our last match at Oak Knoll, so we knew we had nothing to lose,” said Olson. “We knew who we were playing, that it would be tough, but we were aware of what we needed to do differently to win.”

Like so many other sports teams this past fall, the Royals faced many COVID-19 hurdles playing Summit, Westfield, Kent Place and Scotch Plains all twice in addition to playing Newark Academy and New Providence.

“It was definitely the strangest year and season,” said Amato.

“It was touch and go that our season would even happen,” she said. “Although the season was short, it turned out to be one for the record books. As the underdogs, I could not be prouder of this team and how they worked hard to improve all season long and came out on top.”

Despite the pandemic challenges, the Royals attribute much of their success this season to playing and losing to these top ranked teams.

“While losing most of our matches to these tough teams, our own games improved and we got better by playing against these great players,” said co-captain Emma Burgess, ’21.“Our team had a strong sense of community that kept us all very dedicated, passionate, and excited to play throughout the season. We were extremely supportive of each other, which helped us to stay motivated on the court, and this stems from the welcoming nature of the program. We also could not have handled opponents such as Kent Place without the coaching we received from Coach Amato and the belief she had in us as a team.”

Olson said that teammates Ava Cusak ’23 and Sofia Russo ‘21 set the tone for the winning match during first doubles by landing their first point.

“That point gave us the belief that we were in the match and for the first time, made winning seem like a possibility,” said Olson. “It gave the rest of us playing the encouragement and motivation to win our individual matches.”

Olson said Coach Amato focused her players, with limited practice time on making smarter shot placements, specifically focusing, and knowing where to hit shots, so that during match time, it became second nature.

“Coach Amato puts in a lot of time and effort and truly cares about every single one of us,” said Olson. “She always has confidence and believes in us no matter who we play, and I think on that day our whole team played to our full potential. I was so happy to share this moment with her!” 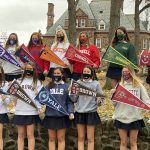 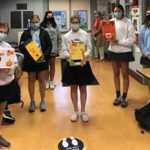