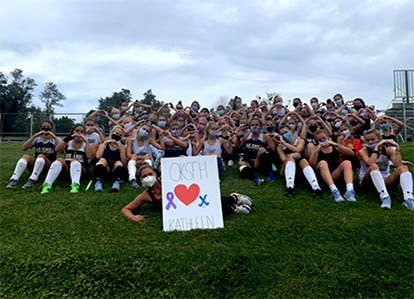 The Oak Knoll field hockey team is rallying for a win against children’s cancer this fall, by raising funds for Children’s Hospital of Philadelphia (CHOP).

The Royals are participating in The Parkway Run & Walk: Virtual Edition, where teams are challenged to run 6,546 miles this fall in honor of the 6,546 CHOP oncology patients treated in the past decade.

The Royals are contributing to the virtual Parkway Run & Walk fundraising platform The Kath-A-Lon, in honor of Oak Knoll field hockey alumna Kathleen O’Connor ’14 who was diagnosed with Non-Hodgkin lymphoma in 2016.

The OKS field hockey team has pledged to run 18 miles in honor of O’Connor’s field hockey number when she played at Oak Knoll. To date, The Kath-A-Lon has logged nearly 65,000 miles and raised nearly $78,000 for CHOP.

“Kathleen provided not only a talent for field hockey, but she contributed so much off the field,” said Oak Knoll Assistant Field Hockey coach Christina Sumas ’98.

“She was one of those players who defines what our Oak Knoll field hockey ‘family’ is all about. She earned the nickname “X-factor” for her ability on the field. She was a warrior through her illness, is a true fighter and a true inspiration to us all.”

“Kathleen’s strength and determination through her fight is an inspiration for all Oak Knoll field hockey players,” said senior field hockey captain Keely Comizio ’21, whose sister was in the same grade as Kathleen at Oak Knoll. “Kathleen has already run more than 120 miles to raise money for CHOP, so our team’s 18 miles, in honor of her jersey number, was a small gesture we could do to show our support.”

O’Connor played field hockey and lacrosse at Oak Knoll School, while winning 3 state championships and one Tournament of Champions for field hockey.

Her athletic career continued at Villanova University where she played lacrosse. It was during her junior year that she was diagnosed with Non-Hodgkin lymphoma, undergoing a cutting edge clinical trial at CHOP, which pushed her into remission. A year later, her cancer relapsed. Thanks to more CHOP cutting-edge treatment, including a stem cell transplant, O’Connor has now been cancer-free for the past two years.

“This is a great service opportunity because this specific fundraiser is raising money and awareness for childhood cancer for both an Oak Knoll student, but more specifically an Oak Knoll field hockey alum,” said senior field hockey captain Gabriella Volpe ’21.

Because service is an integral part of life at Oak Knoll, Head Field Hockey Coach Ali Good ’95 said her team wanted to dedicate their time to something that was personal for them.

“Being able to raise money and awareness to childhood cancer, a cause that affected one of our own field hockey players, was so special to us,” said Good.

“Even though the girls are so busy with academics and sports, it’s so important to make the time for service. Kathleen has won many championship titles, but her biggest win was against cancer. She is a great example to our athletes on how sports can prepare you for life.” 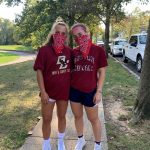 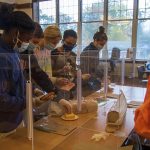