Sharon Wood, the first North American woman to summit the world’s tallest mountain, spoke to students and faculty at Oak Knoll School Thursday, urging them to overcome the risks that prevent them from achieving their goals.

Wood recounted to students in the afternoon, and in the evening to parents, how what she termed “anticipatory angst” almost kept her from achieving the milestone of reaching the summit of Mount Everest on May 20, 1986.

“The only thing I needed was to remove my own self-imposed obstacles,” she said, adding that she also had relied on the strength of those around her.

“It took a team to get there. There’s no way I would be here or got there on my own. It is the relationships that matter most in this story,” she said.

However, a major challenge stood in her path even before she made history as, despite climbing since age 12, she was stymied in her first attempts to climb Everest.

“I had to apply three times,” she said, adding that the climbing teams were determined on a consensus vote and that there was concern she could compromise the dynamic of the team.

“I was so disappointed. I felt so betrayed by my colleagues, by my peers, by my friends,” Wood said.

That’s when she decided to embrace one of two paths at the crossroads where she found herself.

“I had to make a decision then: Stay disappointed and resentful and go home or make it my goal to go back to the mountains and do some spectacular climbs and come back and get so good that they couldn’t say no,” she said.

That perseverance, as well as the idea of overcoming large obstacles by breaking them down into bite-sized pieces, helped her ultimately achieve her goal.

“I didn’t focus on the obstacle there, I focused on what I need to do to keep on going,” she said.

Wood also urged students to pursue their dreams for themselves and not the fleeting benefits or fame that may come from the achievements.

Before addressing students and faculty, Wood was interviewed by Kylie Gall ’20, editor of Oak Knoll’s student newspaper, Untucked, and dined with a group of seniors.

Wood recently wrote a book on her exploits, “Rising: Becoming the First North American Woman on Everest,” which is set to be released by Mountaineers Books next month.

Wood’s talk was sponsored by the Oak Knoll Parents’ Association, which supports the social, spiritual, educational and financial programs of Oak Knoll School. 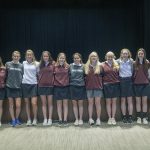