Thirteen members of the Oak Knoll School of the Holy Child Class of 2020 confirmed their commitment to continue athletic competition at the collegiate level Wednesday, November 13, 2019, by signing early National Letters of Intent.

The student-athletes officially signed letters of intent – or have become committed to the admissions process in the case of Ivy League institutions – during a ceremony including members of the athletic department, faculty, staff, administration and parents.

Athletic Director Kelly Childs touted the varied accomplishments of the scholar-athletes and cited each for being members of the Oak Knoll community who excel in competition, the classroom and beyond.

“As Cornelia Connelly said, ‘you must not hide the gifts God has given but use them in his service,’ Childs said. “You have all worked hard in the classroom, the community and on the field and court to earn this opportunity to continue to be a student-athlete at the next level.

“We are so excited to follow your journey and see the amazing things you do pursuing passions and leadership opportunities,” she added. “You have individually and collectively improved our athletics programs here we hope you continue to come back and share your future experiences with us.”

Childs also thanked the parents, administrators, coaches, teammates and friends in attendance who have all supported and will continue to support athletic and personal endeavors.

The committed student-athletes celebrated include:

• Emily Antunes ’20, Lebanon – Providence College, field hockey
A starter on the field hockey team that won Sectional and Group championships this season, Antunes is also a three-year winter track athlete and will serve as captain this season. She has also been an elected representative of her class for the Athletic Council for three years. She works as a student editor in the Writing Center, is a member of On the Pulse, a peer tutor and was named an AP Scholar this fall.

• Anabelle Brodeur ’20, Essex Fells – Columbia University, field hockey
Brodeur is a three-sport student-athlete including serving as captain for the field hockey team, and as a member of the ice hockey and golf squads. She was elected Social Council representative in her junior and senior years, serves as a staff writer for the school newspaper “Untucked,” and holds the position of co-president of the Glee Club. She also participates in fundraising for Charity: Water, organizes schoolwide activities as a homeroom coordinator and serves as a peer leader for grade 8 students.

• Riley Campbell ’20, Madison – Harvard University, lacrosse
Campbell is a four-year member of the varsity lacrosse team, including a starter on the 2019 Tournament of Champions team and was elected as a captain of the 2020 team. She has served as a summer vacation bible school counselor for three years and Charity: Water club president. She is currently the peer leader coordinator of the program that supervises all grades and their specific peer leader activities. This winter, Campbell will be one of the leaders of the Red Cross blood drive held on campus and currently serves as a Eucharistic Minister.

• Mary Kelly Doherty ’20, Summit – University of Notre Dame, lacrosse
Doherty is a starter on the field hockey team and was a member of the 2019 Tournament of Champions varsity lacrosse team. She is also President of Operation Smile, Co-President of the Health and Nutrition Club, and is a member of Knit for the Needy.

• Avery Donahue ’20, Madison – Harvard University, field hockey
Donahue is a four-year varsity player and current co-captain of the field hockey team. A three-season athlete, Donahue has competed on the varsity swim team and the varsity track and field team. She received a Silver Key award for photography in the Scholastic Art and Writing Competition and an Honorable Mention in the Randolph Photography Invitational. Additionally, she is a member and past president of Charity: Water, co-president of the Glee Club and a member of the Economics Club.

• Julia Ford ’20, Mendham – Brown University, lacrosse
Ford was a member of the 2019 Tournament of Champions varsity lacrosse program and just completed her final year of varsity soccer, finishing as one of the team’s leading goal scorers. Ford is president of the Glee Club, a senior peer leader and schoolwide student general homeroom coordinator. Additionally, she is an active participant in the Pause for Paws Club, Operation Smile and a community service volunteer for the Oasis Foundation.

• Kylie Hampton ’20, Flemington – College of the Holy Cross, field hockey
Hampton is a three-year member of the field hockey program. Additionally, she has competed for three years with the ice hockey and golf programs. She is a Eucharistic Minister and one of the American Red Cross blood drive coordinators and is one of the student-run general homeroom leaders.

• Aine Maseker ’20, Madison – University of Notre Dame, lacrosse
Maseker is a four-year soccer player, elected captain her senior season, and a four-year varsity lacrosse player and starter on the 2019 Tournament of Champions team. She will also serve as one of the 2020 lacrosse captains. Maseker is a Eucharistic Minister and a youth ministry retreat leader in her parish assisting with freshmen making their confirmation. Additionally, Maseker serves as co-president of Knit for the Needy and the Health and Nutrition Club, as well as the Grade 9 peer leader coordinator.

• Paige Morton ’20, Summit – Princeton University, basketball
Morton is a four-year varsity basketball player and elected captain for her senior season. Morton is an altar server and Eucharistic Minister, as well as a member of the Oak Knoll Global Exchange Program. Her passion for videography allowed her to create a YouTube channel and is also an award-winning photographer. Morton has competed on the spring track and field team for the past three seasons.

• Bridget Murphy ’20, Summit – Princeton University, field hockey
Murphy is a four-year varsity starter and current co-captain of the field hockey team. Murphy is also a four-year member of the varsity ice hockey team and selected as a captain for her senior season. Murphy volunteers at the Boys and Girls Club of Hudson County organizing Christmas present drives for foster and at-risk youth, as well as the To and Thru organization. Murphy is a peer leader, Eucharistic Minister and was named an AP Scholar.

• Jodi Porto ’20, Berkeley Heights – Brown University, field hockey
Porto is a four-year member of the field hockey program. A three-sport athlete, Porto is a four-year member and elected captain of the varsity ice hockey team, and a member of the spring track and field team. Porto has worked as a lifeguard each summer and has volunteered at the Saint John’s Soup Kitchen and Hospitality at Church as part of the Family Promise Program. She was also named an AP Scholar.

• Keelin Schlageter ’20, of Maplewood – University of Notre Dame, lacrosse
Schlageter is a four-year member of the varsity lacrosse team, including as a starter on the 2019 Tournament of Champions team and a co-captain of the 2020 team. In previous years she served as her class representative for Athletic Council, and this year she was elected as the Athletic Council President. A Eucharistic Minister, co-president of the Health and Nutrition Club and founder of the inaugural Oak Knoll triathlon club. She recently qualified for the USA Triathlon Age Group Nationals next August. Schlageter has worked as a lacrosse coach and Special Olympics of New Jersey track and field coach and was named an AP Scholar earlier this fall.

• Tietjen Spoor ’20, New Vernon – United States Military Academy at West Point, lacrosse
Spoor has competed in soccer, basketball, spring track and field before joining the varsity lacrosse team her junior year as a goalie. Spoor helped lead the team to the 2019 Tournament of Champions title. A math team member, HOPE Committee coordinator and Mental Health Club member, Spoor also served as a host student for the Global Exchange Program during her junior year. Spoor has volunteered with several church mission trips and vacation bible schools, with the Special Olympics and is currently a senior intern at her church leading a group of grade 8 students in weekly meetings. 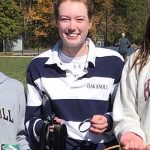