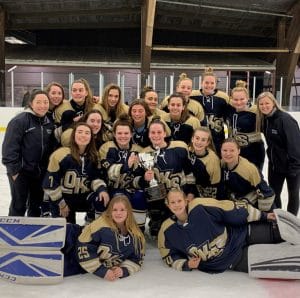 The Royals dominated on the ice during the upset as freshman stand-out goalie Emmalyn Lacz ’23, of Harding Township, earned a remarkable 29 saves. Kate Siedem ’23, of Madison, and Bridget Murphy ’20, of Summit, each skated away with two goals a piece, while Emma Ramsey ’23, of Summit, also tallied a goal for the Royals.

“I am very excited about this win,” Lacz said. “It’s another huge accomplishment for our ice hockey program here at Oak Knoll. This was the first Union County Tournament and winning has reflected our hard work as a team over the season. This is a huge motivation for the team to continue playing well and accomplish as much as we can towards the end of the season.”

“I have been lucky enough to be part of the program since its inception, so being able to watch the hockey team reach this milestone is very special,” said Meghan Cassidy, Head Coach of the Royals’ ice hockey team. “Our success can be credited to our senior leadership and young talent, which has made this team different from any other team the ice hockey program has had in the past.”

Cassidy said that being the first-ever winners of the Union County Tournament is a huge accomplishment for the team, but the season is far from over.

Currently, the Royals are training for the Prep School Tournament and the inaugural State Tournament later in February. To catch the Royals on the ice, check here for their remaining winter season schedule. 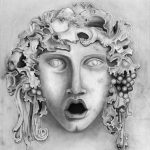 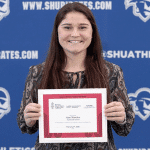