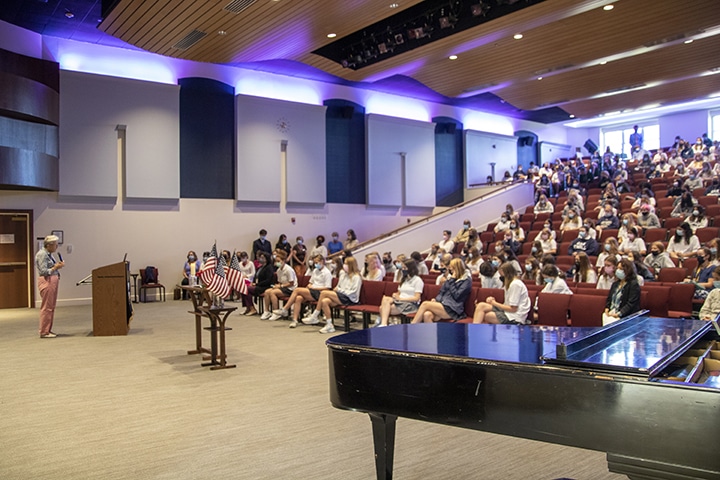 In the days after the September 11, 2001 terror attacks 20 years ago, communities near and far banded together on a mission to assist the victims’ families and the first responders who ran to the scenes that day.

Much like the helpers who ran toward the chaos, one community just 19 miles outside of New York City, started its own rally to action, heeding the call of their school’s mission to serve those most in need.

Following the tragic events of September 11, 2001, Oak Knoll formalized a grassroots service program, now known as the school’s annual Service Day – where, for the past 20 years, students have dedicated a day of service to those in their communities instead of attending classes. Today, the school partners with more than a dozen organizations during its annual Service Day.

On September 11, 2001, Summit, NJ resident Dr. Andrea Gibbons Hubschmann ’02, OB/GYN physician at Summit Health was beginning her senior year in high school. Her father worked for the Bank of New York in risk management and was scheduled to be at a meeting at the World Trade Center that morning.

“We were all called to the auditorium together and I was sitting next to one of my teachers whose husband at the time worked for the same NYC company as my father,” said Hubschmann, whose siblings, aunts, mother and husband also attended Oak Knoll. “We learned that this teacher’s husband thankfully didn’t go into the office that day, but she told me to stay close to her until we could reach my father, who had evacuated safely.”

The most vivid memory for Hubschmann was the large number of students who had parents or relatives working near the crash site in New York City were told to wait in the auditorium until they received word their loved ones were safe. 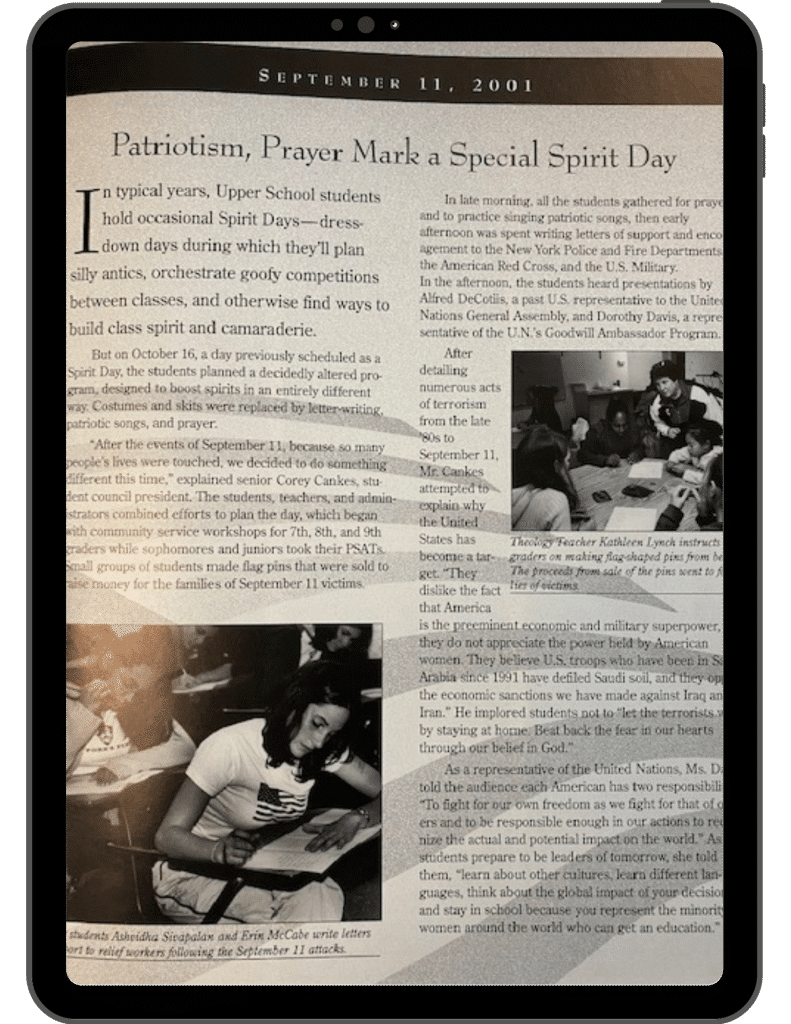 An article in the Spring 2002 edition of Review magazine.

“There were so many families who had loved ones there and we were all in this holding pattern,” said Hubschmann. “This was the most poignant part for me.”

Mary Sciarrillo, who was Oak Knoll’s Dean of Students in 2001 and would later go on to become Head of the Upper School for 10 years, recalls that administrators began to share what information they had with their students and began to contact families.

“Cellphones were the only way to communicate as the landlines went down,” said Sciarrillo. “We prayed, we comforted each other, we cried, and we held it together, together.  Faculty put aside their own concerns, supporting our girls. Oak Knoll is a faith-filled community and on that day, we came together as we always did — in prayer and concern for others.”

As an OKS Campus Ministry representative for six years and the Campus Ministry president senior year, Hubschmann felt an immediate responsibility to give back once classes resumed after the tragedy.

Hubschmann and the Campus Ministry team helped to plan a special commemorative prayer service on October 16, 2001, where the community sang patriotic songs and reflected through prayer. Later in the day, students wrote letters to the 9/11 relief workers and the U.S. military, and heard presentations by Alfred DeCotiis, a past U.S. Representative to the United Nations General Assembly (parent to Leigh DeCotiis ’04 and Katee DeCotiis ’02) and Dorothy Davis, a representative of the U.N.’s Goodwill Ambassador Program. Both speakers, said Hubschmann, were brought on campus to help students understand the events that happened.

Dr. Hubschmann recalls something her father said to her following September 11, 2001.

“He told me that whatever I did in college and beyond, to go out and make the world a better place,” she said. “September 11 has had a profound impact on the rest of my life.” Although 20 years have passed since the national tragedy, it’s still always with Hubschmann and has empowered her to always keep others on her mind.

Hubschmann graduated from Georgetown University with a degree in International Political Economy and taught students in Harlem through NYC Teaching Fellows before entering Jefferson Medical College in Philadelphia and training in OBGYN at New York-Presbyterian/Weill Cornell Medical Center. Today, she serves at Overlook Hospital as the Chairperson of the Perinatal Quality and Safety Committee and is a new member of Oak Knoll’s Board of Trustees. 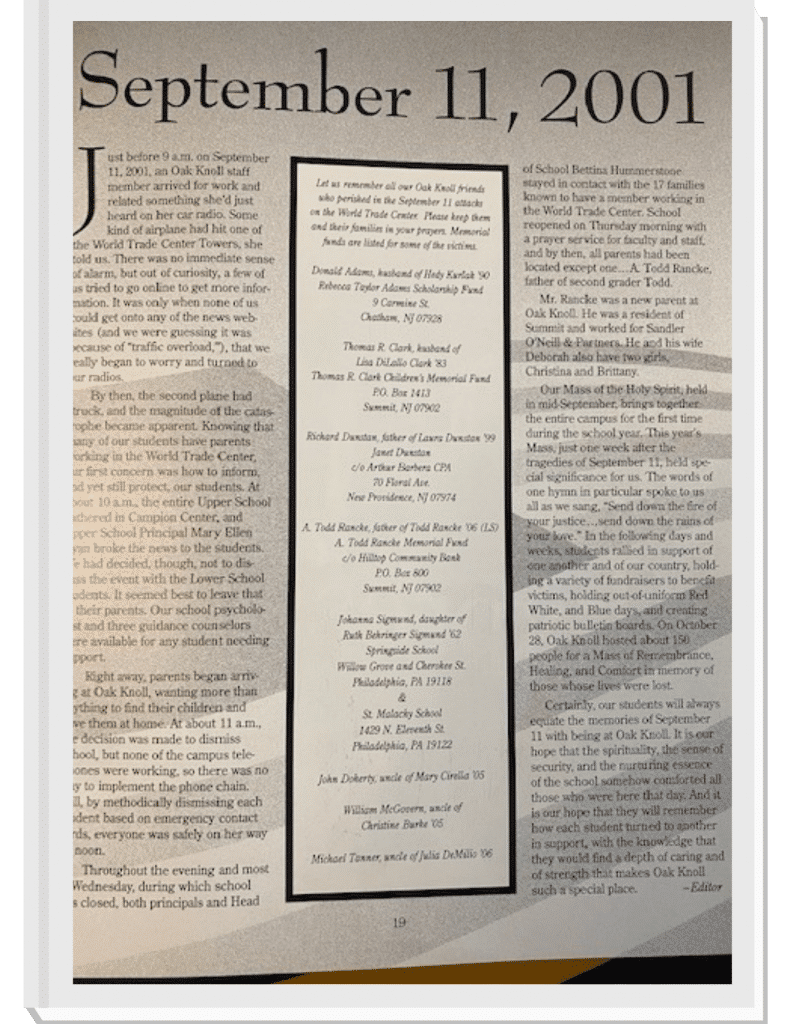 An article from the spring 2002 edition of Review magazine.

“Helping others is instilled in an Oak Knoll education,” said Ann Higgins ’02, a current grade 1 teacher in the Lower School and Hubschmann’s friend and classmate. Higgins was also a senior at Oak Knoll during September 11, 2001.

“Even during dark and difficult times, Oak Knoll remains committed to service and making a difference. I feel impassioned that I am educating other future leaders like Andi. In the end, kindness and wanting to help others are what matter most.”

“We continued teaching for the remainder of that day, doing our best to keep smiling and act normal,” Cepparulo said.

“It was not easy,” said Cepparulo. “We all knew family and friends that worked in NYC, and we knew many of our young students had parents working in both towers. We felt such relief and joy, as we safely put each child in their parents’ or grandparents’ car at the end of the day. We gathered the next day around the Peace tree outside of Bonaventura Hall and prayed. The teachers continued to reassure our students that they were safe.  We relied on our faith. As a community we prayed, we mourned, and we united. I feel blessed to have been surrounded by the faith-filled community of Oak Knoll the day I heard the news that the towers were struck.”

Hubschmann compares the current COVID-19 pandemic to September 11, 2001. “Both days and events were and are turning points, filled with self-reflection,” she said. “Back then, I looked at my world and tried to see where I could fit in to help, as I knew I had a responsibility to make sure myself and friends gave back any way we could.”

Today, Hubschmann and her husband Brian ’96 (LS) raise their three young sons Charlie ’27, Henry ’26, John, age 3 and a new son on the way next month, with the same passion to help those around them in need.

“Twenty years after 9/11, Oak Knoll School is nurtuing its students through another global tragedy,” said Dr. Hubschmann. “The response to the pandemic has been grounded in the same principles that were applied on September 11th – faith, wisdom and service. Oak Knoll School takes care of and nurtures you so that you can go out and offer that same care to the world around you.”

On this 20th anniversary – and every year – Oak Knoll School remembers our community members and all of those who were lost on September 11, 2001. On Friday, September 10, 2021, Oak Knoll School held a prayer service in remembrance of the 20th anniversary of all the lives lost and those affected. The school’s annual schoolwide Service Day will be held on Thursday, October 28, 2021. 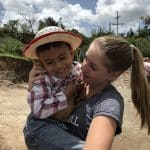 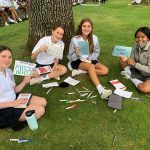