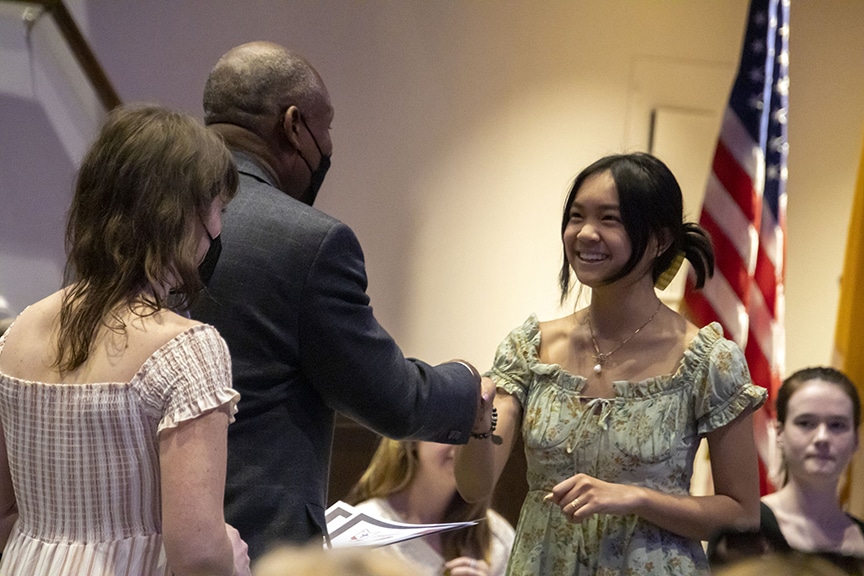 Twenty-two members of the Class of 2022 and three members of the junior class were inducted into the World Language Honor Society on Wednesday, April 13, 2022, in recognition of their dedication and achievements while studying French, Latin, and Spanish all four years while at Oak Knoll School of the Holy Child.

Verónika Zavaleta-Tejeda, Upper School World Language Chair, inducted the students who qualified for membership by taking an honors-level 4 or higher class during their senior year or have reached the AP level in their junior year, via an on-campus assembly for fellow classmates, parents, faculty and staff in The Mother Mary Campion Center for the Performing Arta and streamed live in assigned US classrooms.

During their time at Oak Knoll, the inductees contributed articles to Ecouté-moi and La Vista (Oak Knoll´s French and Spanish newsletters), actively participated in Latin Club, participated in a French theatre competition called Festival de Théâtre Français de New York, and promoted the study of Latin and French in the Lower School.

“The students’ hard work, their commitment, and unfaltering dedication to their learning another language have earned them the high recognition of being inducted into the La Sociedad Honoraria Hispánica, the La Sociéte Honoraire de Français, and the National Junior Classical League Latin Honor Society,” said Zavaleta-Tejeda.

Upper School Division Head Kate McGroarty and guest speaker who studied linguistics during college, extended her congratulations to all the inductees.

“Linguistics is a passion of mine because I find all languages – French, Spanish, Latin, English – to be both beautiful and very complex because no two languages are the same,” she said.

“One of the great things about languages and one that I’ve always admired is that languages are always growing and evolving.  In the English language alone, there are more than a million words, and a new word in English is created every 98 minutes. There is also a lot of language blending trends and technology has evolved to help new words go viral. I encourage you to think about your impact on each of the languages and how are you going to help language grow and evolve,” said McGroarty. 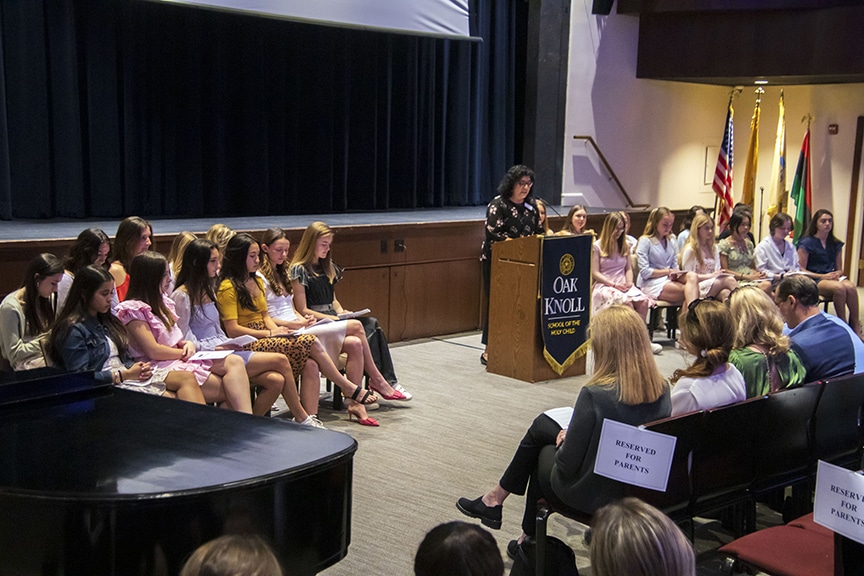 Several students, many of whom will continue language study next year in college, shared reflections bilingually about all they have learned during their four years of foreign language study at Oak Knoll.

Ava Pospeck ’22, who spoke on behalf of Grace Sharp ’22 (who could not attend the ceremony), both members of Oak Knoll’s AP French class said that learning a foreign language has been a significant part of her education at Oak Knoll.

“It has brought me joy, taught me about new cultures and ideas, and has allowed me to build connections between my interests and French customs,” said Pospeck. “Practicing French has brought fun and liveliness into my school day from video chatting with French-speaking students from around the world during my freshmen year to watching the French-translated “Money in the Grave,” during my junior year, French class has always been full of surprises,” she said.

Sarah McManus ’22, a member of Oak Knoll’s AP Latin class said that AP Latin is a rigorous course. “However, the enriching combination of poetry and history has made persevering through this journey more than worthwhile,” she said.

Gabrielle Castro ’22 said that learning the details of Spanish has been especially beneficial to her as someone who has a family that speaks the language.

“While I grew up listening to Spanish, I have gained the ability to communicate with members of my family much more easily,” she said. 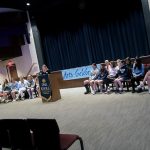