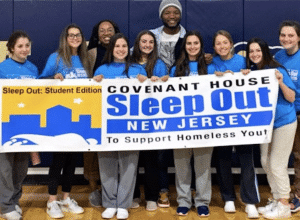 Oak Knoll students organized a sleep-in and raised nearly $6,000 so that others don’t have to “sleep out” on the streets during the 2020 Covenant House Sleep Out: Student Edition. The event raised critical funds needed to combat teen homelessness.

This is the third-consecutive year that the Oak Knoll fundraiser has benefited the Covenant House of New Jersey. Covenant House is the largest privately funded agency in America that provides shelter, food, immediate crisis care, and an array of other services to homeless and runaway youth.

Selma Hannan, an Upper School math teacher, has been the adviser for the Covenant House Club at Oak Knoll since its inception and said, “the girls are truly committed and dedicated to the cause.”

During the sleep-out event on campus, students heard from Michael, a Nigerian immigrant who credits the Covenant House for saving his life.

After receiving his student Visa, a friend promised to pick Michael up at the airport, but never came. Michael, who spoke very little English, became stranded alone in the United States upon leaving the airport. He was robbed at gunpoint and his documents and belongings were stolen. Then homeless, Michael bounced around between homeless shelters until a social worker connected him to the Covenant House of New Jersey. He is now a nurse and lives in his own apartment thanks to the help he received from the CHNJ.

“Michael’s story was so inspirational and serves as a reminder that there is so much more we can do to address homelessness and injustice,” said Henry.

“This sleep-out was so important because it truly reminds us how fortunate we are to have the opportunities we have been given,” said Meehan.

“Coming together as an Oak Knoll community to show our support and love for these people is very important. It’s an amazing chance to recognize our blessings and give back to teens just like us who have dealt with unimaginable hardship.” 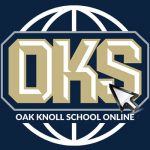 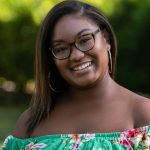