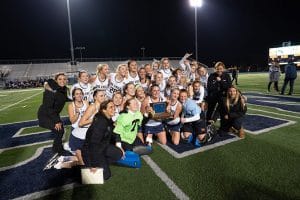 The award-winning Oak Knoll Royals varsity field hockey team continues to dominate off the field as they recently scooped up a remarkable amount of postseason accolades.

Eleven Royals were selected from more than 2,300 student-athletes in 270 high schools across the country and named to the 2019 Keith Waldman – Optimal Performance Associates/NFHCA High School National Academic Squad.

The High School National Academic Squad program recognizes high school seniors and juniors who have achieved a minimum cumulative, unweighted grade-point average of 3.50 out of 4.0 — or the equivalent — through the first quarter of the 2019-20 school year. Seniors and juniors who earned a 3.9 out of 4.0 — were recognized as Scholars of Distinction.

Additionally, the National Field Hockey Coaches Association (NFHCA) honored Oak Knoll’s field hockey program with the most national All-American athletes. Donahue and Murphy were named to the first team, Comizio to the second and Anabelle Brodeur ‘20 to the third.

Oak Knoll midfielder Avery Donahue was named the Max Field Hockey New Jersey Region and National Player of the Year. Donahue led the Royals to a perfect 26-0 season finish and program-best 20 shutouts, winning the Non-Public State Championship and Tournament of Champions. According to Max Field Hockey, “Donahue was the engine for the top team in the nation this Fall and potentially one of the best squads we’ve seen in our years of High School Coverage.”

“I’m so grateful to my coaches and teammates – this year and in my previous years,” said Donahue, who will be playing field hockey at Harvard University in the Fall. “This award says a lot about them. My advice to girls who want to play field hockey in college is that you have to put in the work – even more in between seasons. It also helps to have coaches that can show you the right things to work on,” Donahue said.

The National High School Coaches Association interviewed Good after she was named coach of the year.

Donahue and Murphy were also named by Max Field Hockey to the first All American team, Comizio to the second and Brodeur to the third team. Antunes and Colleen Quinn ‘21 were also named to the Max New Jersey All-Region Teams.

“It’s amazing to see the national recognition that our student-athletes and coaches are receiving,” said Oak Knoll’s Athletic Director Kelly Childs. “Last year was such a special season and all of these awards are a testament to their hard work on the field and in the classroom,” she said. 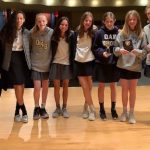 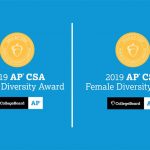