Ever since Eric Weinhoffer ’02 can remember, he enjoyed building things. Like countless children, Eric first encountered this passion through LEGOs.

“They were ever-present in my childhood, and I was constantly building things with them.”

After he graduated from Oak Knoll’s coed K-6 Lower School, Eric went on to Oratory Prep, a private secondary school in Summit. In 2012, Eric earned a bachelor’s degree in mechanical engineering from the Georgia Institute of Technology, where he served as president of the school’s Invention Studio, a student-run makerspace.

Since graduation, Eric has worked as engineer in a variety of California-based firms including Media Maker, Inc., Other Machine Co. and Salidrone Inc., where he previously worked to develop the infrastructure needed to improve the manufacturing processes for sailing drones that are used for studying ocean environments, including climate and fish stock analyses.

He is currently working on a freelance basis. 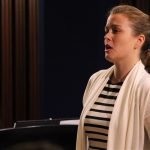